Located deep in the human gut, the small intestine is not easy to examine. X-rays, MRIs and ultrasound images provide snapshots but each suffers limitations.

Help is on the way.

University at Buffalo researchers are developing a new imaging technique involving nanoparticles suspended in liquid to form ‘nanojuice’ that patients drink. Upon reaching the small intestine, doctors strike the nanoparticles with a harmless laser light, providing an unparalleled, noninvasive, real-time view of the organ.  The advancement could help doctors better identify, understand and treat gastrointestinal ailments.

Conventional imaging methods show the organ and blockages, but this method allows the medical team to see how the small intestine operates in real time. Better imaging will improve understanding of these diseases and allow doctors to more effectively care for people suffering from them.

The average human small intestine is roughly 23 feet long and 1 inch thick. Sandwiched between the stomach and large intestine, it is where much of the digestion and absorption of food takes place. It is also where symptoms of irritable bowel syndrome, celiac disease, Crohn’s disease and other gastrointestinal illnesses occur. To assess the organ, doctors typically require patients to drink a thick, chalky liquid called barium. Doctors then use X-rays, magnetic resonance imaging and ultrasounds to assess the organ, but these techniques are limited with respect to safety, accessibility and lack of adequate contrast, respectively.

Also, none are highly effective at providing real-time imaging of movement such as peristalsis, which is the contraction of muscles that propels food through the small intestine. Dysfunction of these movements may be linked to the previously mentioned illnesses, as well as side effects of thyroid disorders, diabetes and Parkinson’s disease.

The researchers worked with a family of dyes called naphthalcyanines. These small molecules absorb large portions of light in the near-infrared spectrum, which is the ideal range for biological contrast agents. They are unsuitable for the human body, however, because they don’t disperse in liquid and they can be absorbed from the intestine into the blood stream. To address these problems, the researchers formed nanoparticles called ‘nanonaps’ that contain the colourful dye molecules and added the abilities to disperse in liquid and move safely through the intestine.

In laboratory experiments performed with mice, the researchers administered the nanojuice orally. They then used photoacoustic tomography (PAT), which is pulsed laser lights that generate pressure waves that, when measured, provide a real-time and more nuanced view of the small intestine.

The researchers plan to continue to refine the technique for human trials, and move into other areas of the gastrointestinal tract. 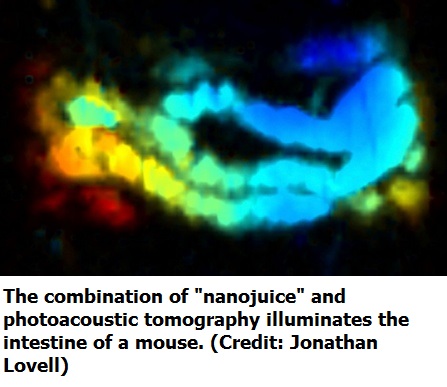 One thought on “‘Nanojuice’ could improve how doctors examine the gut.” Leave a comment ›