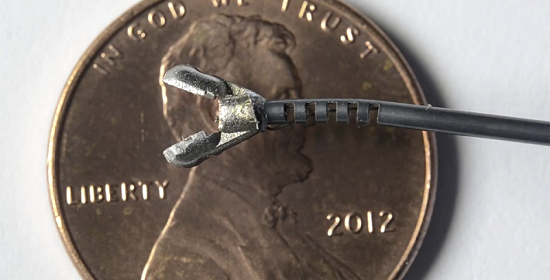 Needlescopic surgery, which uses surgical instruments shrunk to the diameter of a sewing needle, is the ultimate form of minimally invasive surgery. The needle-sized incisions it requires are so small that they can be sealed with surgical tape and usually heal without leaving a scar.  Although it’s been around since the 1990s, the technique, which is also called mini- or micro-laparoscopy, is so difficult that only a handful of surgeons around the world use it regularly.  Now, with the flick of a tiny mechanical wrist, a team of engineers at Vanderbilt University hope to give needlescopic surgery a whole new degree of dexterity.  The team state that they have developed a surgical robot with steerable needles equipped with wrists that are less than 1/16th of an inch (2 mm) thick. The achievement is described in a paper to be presented at the International Conference on Robotics and Automation in Seattle.

The new device is designed to provide needlescopic tools with a degree of dexterity that they have previously lacked. Not only will this allow surgeon-operators to perform a number of procedures such as precise resections and suturing that haven’t been possible before, but it will also allow the use of needles in places that have been beyond their reach, such as the nose, throat, ears and brain.

Previous studies show that traditional minimally invasive surgery (MIS) has become increasingly common in recent years. This method, which involves operating with instruments inserted through incisions that range from 3/8th to 3/16th of an inch (10 mm to 5 mm), generally causes patients less pain, less tissue damage, less scarring and shorter recovery periods.   The researchers state that the effort to adapt robotic technology to MIS has been dominated by Intuitive Surgical’s da Vinci Surgical System, a robotic surgical system designed specifically for the minimally invasive approach. Depending on the type of surgery, it requires incisions that are 1/3 of an inch (8 mm) or 3/16th of an inch (5 mm).

The team explain that although it works very well for abdominal surgery, the da Vinci uses a wire-and-pulley system that is extremely difficult to miniaturize any further, so it won’t work in smaller spaces like the head and neck.

To overcome this the team have been developing a surgical robot that uses steerable needles for the past six years. The lab state that this is a system of telescoping tubes that are made out of nitinol, a memory metal that retains it shape. Each tube has a different intrinsic curvature. By precisely rotating, extending and retracting the tubes, an operator can steer the tip in different directions, allowing it to follow a curving path through the body.

Results show that this design allows the needles to operate in areas of the body that neither manual endoscopic instruments, which are straight rods equipped with a variety of end effectors, nor the da Vinci robot can reach. However, its usefulness was limited by the fact that the needles didn’t have a wrist.

Adding the wrists to the steerable needles greatly expands the system’s usefulness, state the researchers.  They go on to predict that there are a myriad of potential applications in some really exciting areas such as endoscopic neurosurgery, operating within small lumens such as the ear, bronchus, urethra, etc. This would allow consultants to do surgeries that at present require much larger incisions and may even enable them to perform operations that are not feasible at present.

The current has proven that the tube is extremely rigid, however the lab discovered that if they cut a series of tiny slots down one side, the rigidity decreased substantially. Enough, in fact, so they could get it to bend up to 90 degrees by pulling on a small wire that runs inside the tube that is attached at the tip. The wrist springs back to a straight position when tension on the wire is released.  The team say they have applied for a provisional patent on the design in May.

For the future the researchers would like to test the system by using it for transnasal surgery, which are operations to remove tumours in the pituitary gland and at the skull base that traditionally involve cutting large openings in a patient’s skull and/or face. Previous studies have shown that using an endoscope to go through the nasal cavity is less traumatic, however the procedure is so difficult that only a handful of surgeons have mastered it.

The team feel that once they give this tool to surgeons they will find all kinds of applications that previously hadn’t been thought of.  By the end of the summer, they hope to have completed the control software and the interface that allows the surgeons to operate the device. They go on to add that they are actively looking for a commercial partner who will take the new instrument through the FDA approval process including initial clinical trials.  The researchers conclude that they are working to a time-line that would see the system become available to surgeons in four to five years.

The coin above wasn’t enlarged to make the pincer-like device look extremely small — it’s really that tiny. That “pincer” is a two-millimeter-thin instrument designed and built by a group of researchers from Vanderbilt University for incredibly precise minimally invasive surgery. It’s pretty comparable to the da Vinci surgical robot, though that one has bigger needles and requires five to eight millimeter incisions. According to the Vanderbilt team’s lead researcher, Robert Webster, the da Vinci works great for abdominal surgery, but it’s not ideal for smaller parts of the body. Unfortunately, “the da Vinci uses a wire-and-pulley system that is extremely difficult to miniaturize any further,” he said. Credit: Vanderbilt University’s Medical Engineering and Discovery Laboratory.