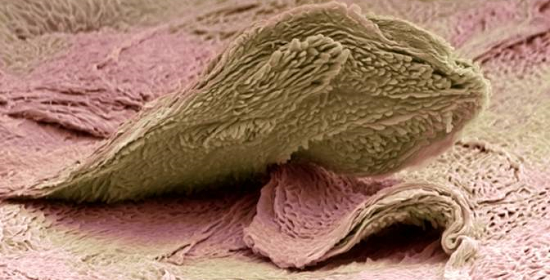 When skin cells responsible for pigmentation are exposed to estrogen or progesterone, the cells respond by adjusting their melanin production, resulting in either skin darkening or lightening. Although pregnant women often experience alterations in skin pigmentation, the reason for the changes has long puzzled researchers.  Now, a study from researchers at the University of Pennsylvania, has identified cellular pathways in skin pigment cells that are activated by estrogen and progesterone, two of the main female sex hormones, and also identified synthetic hormone derivatives that specifically influence the pigment producing pathway. The team state that their findings provide critical information that could lead to the development of new products that change skin tone without exposure to UV radiation or toxic-bleaching agents. The study is published in the journal eLife.

Previous studies show that correcting disorders of human skin pigmentation is difficult, as safe and effective medications that alter melanin pigment production are lacking.  Although the molecular signals controlling skin color are varied and complex, the observation that pregnant women often experience changes in skin tone has suggested that sex hormones are likely involved. As there are changes in the levels of many hormones and other molecules during pregnancy, it has proved difficult for researchers to identify which one could be responsible for the change in pigmentation.  However, scientists were given a clue when it was noted that women sometimes develop darker skin pigment on their face when taking birth control pills which contain the hormones estrogen and progesterone.  The current study shows that physiologic estrogen and progesterone reciprocally regulate melanin synthesis, to lighten or darken the skin.

The current study exposed human melanocytes, the cells that produce the skin pigment melanin, to estrogen levels usually seen during pregnancy; the cells responded by increasing melanin production. Results show that ethinyl estradiol, a synthetic variant of estrogen commonly used in birth control pills, had a similar effects. Data findings show that after four days, the melanin content of the cells increased 200 to 300%, which would represent a significant tanning response in skin.

The lab state that in many tissues, the effects of estrogen are counterbalanced by progesterone; consistent with this, when melanocytes were exposed to progesterone, melanin production decreased, causing skin to lighten.  Results show that estrogen upregulates, and progesterone downregulates most of the same signaling cascade stimulated by melanocyte stimulating hormone (MSH).

Further testing showed that melanocytes express a separate, non-classical, estrogen receptor, GPER, as well as a non-classical progesterone receptor, PAQR7. The group explain that neither receptor had been studied previously in melanocytes, with results based on abolishing the estrogen and progesterone effects by deleting the receptors, verifying that the new receptors are responsible for the skin pigment effects. The researchers also utilized synthetic derivatives of estrogen and progesterone which bind to the nonclassical receptors to boost skin pigment through GPER, or decrease it through PAQR7.  As an initial step towards the development of a therapy, the researchers purified the selective GPER-activating compound, and applied it in a cream to the ears of mice.  The group conclude that the treatment increased melanin levels by about 60% over three weeks, causing a noticeable darkening of the mouse skin.

The team surmise that their findings suggest that by using derivatives of sex hormones to selectively influence the natural melanin production machinery, the global community may be able to develop treatments to correct such disorders.  For the future, the researchers state that understanding how to manipulate skin tone without the need for harmful ultraviolet radiation or toxic chemicals could have a significant impact on the cosmetic industry.  They go on to add that the development of drugs that specifically target the natural pigment production pathway in skin cells could be a safer and more effective alternative to the tanning beds and bleaching creams frequently used today.

Source: Perelman School of Medicine at the University of Pennsylvania

Skin cell. Coloured scanning electron micrograph (SEM) of a squamous cell on the surface of the skin. This is a flat, keratinised, dead cell. Squamous cells are continuously sloughed off and replaced with new cells from below. Magnification: x4000 when printed at 10 centimetres wide. Credit: Science Photo Library – STEVE GSCHMEISSNER.