It is known that blood vessels are responsible for transporting oxygen-rich red blood cells, nutrients, and immune cells throughout the body, to name just a few functions, and defects in blood vessels can lead to a variety of life-threatening diseases.  Therefore, the generation of new blood vessels via angiogenesis is critical for meeting tissue oxygen demands, with a role for adult stem cells in this process unclear.  Now, a study from researchers at Osaka University identifies adult vascular endothelial stem cells (VESCs) capable of generating fully functional blood vessels.  The team state that the VESCs expand and regenerate entire vasculature structures, supporting the existence of an endothelial hierarchy within blood vessels.  The study is published in the journal Cell Stem Cell.

Previous studies show that in blood vessels, the existence of tissue-resident stem cells has been intensely debated.  Recent studies from the lab identified a population of endothelial cells (ECs), isolated from the inner most layer of blood vessels, with properties resembling those of stem cells. The researchers identified a glycoprotein, called CD157, expressed in the small fraction of EC population.  The key characteristic of stem cells is their ability to regenerate themselves, so the group hypothesized that the CD157-positive ECs would be able to form new blood vessels. The current study tests this theory on mice with damaged blood vessels which supply blood to the liver by injecting them with CD157-positive ECs isolated from the liver.

The current study shows that a month after transplantation, the CD157-enriched cells generated fully functional portal veins, portal venules, sinusoids, hepatic venules, and arteries, essentially, every type of blood vessel found in a healthy liver.  Results show that even when mice are injected with just one cell, a single cell is enough to reconstitute their blood vessels.  Data findings show a year later, the cells continue to replenish normal blood vessel tissue in the liver, precisely what would be expected of functioning, native stem cells.

Data findings show that when VESCs collected from healthy mice are injected into mice with hemophilia A, the cells begin generating new liver blood vessels, and the level of FVIII in the blood shot up, from less than 1% of normal to over 60%.  The group state that the therapeutic potential of these cells does not appear to be limited to liver defects, with VESCs from muscle tissue were successfully used to treat limb ischemia in mice, where a lack of oxygenated blood can lead to tissue damage and foot necrosis. They conclude that their study potentially represents a turning point in cell-based therapies for blood vessel disorders. 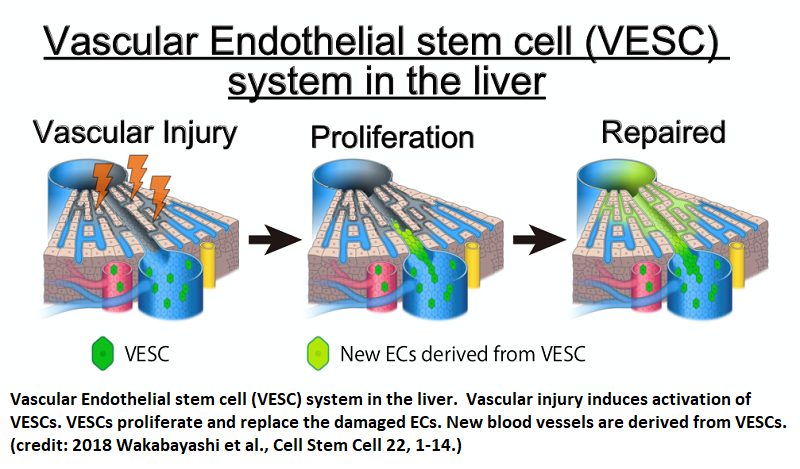